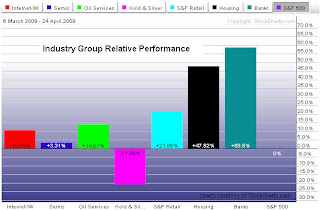 Our previous post below took a look at the nine sectors and their relative performance versus the benchmark SP500 index. The chart above breaks down those sectors to Industry Groups in order to closely examine where the strength and weakness is concentrated. We noted that Consumer Discretionary Sector was an outperformer since the March lows…A closer look details that Retailers and Homebuilders have indeed been strong relative performers along with Banks. These three groups have been the weakest since the August 2007 highs, so it’s not surprising that they are the first to show strength at this point in the cycle. Technology was highlighted to be an area to consider placing new investment funds. Internet and Semiconductor Groups are also showing relative strength, so it’s not surprising that Nasdaq Composite has been a leader since it represents the main core of the Technology Sector.

As stated in previous post that the trader would be well served keeping close watch not only on the broader sectors but also on specific industries within the SP500 index.