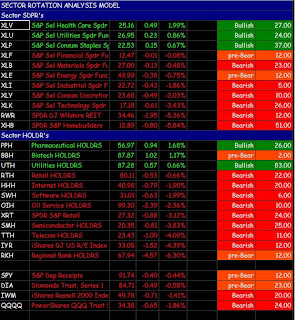 Well, the final details of the Banking System’s Stress Test have been released after a perfectly orchestrated “leaking of the results” this week by the government. Today was “Sell The Fact” day right on cue. The Sectors that have been leading the charge higher became the downside leaders in today’s controlled liquidation. The table above shows the various SP500 Sectors and Industry Groups filtered on a 15 min time frame. The only sectors in the green were defensive groups such as Healthcare, Utilities, and Consumer Staples. All others were squarely in the red lead by Regional Banking which succumbed to profit-taking . None of this action should come as a big surprise to traders given the meteoric rise these past eight weeks.

The chart below displays the PTG TRIPLE SYNC, which monitors the Total Market Sync on three time frames for confluence of buy and sell signals. The strongest signals are when all three time frames fire simultaneously, which they recently did on Wednesday May 6th. Polaris Trading Group members were alerted in real-time of the SELL SIGNAL during session trading and were able to begin properly positioning the short side for today’s imminent sell-off. 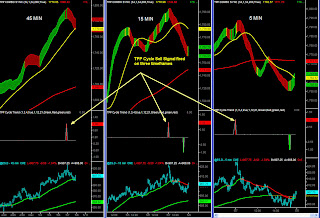